What You Need to Know About Adopting a Stray Cat 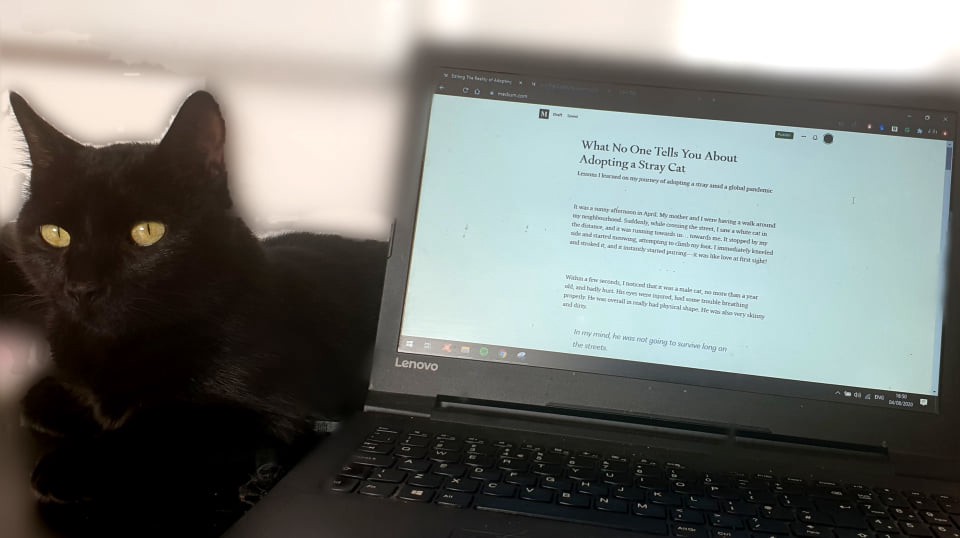 It was a sunny afternoon in April and my mother and I were having a walk when suddenly while crossing the street, I saw a white cat in the distance, and he was running towards us… towards me. It stopped by my side and started meowing, attempting to climb my foot. I immediately kneeled and stroked it, and it instantly started purring —it was like love at first sight!

Within a few seconds, I noticed that he was male, no more than a year old, and badly hurt. His eyes were injured and had some trouble breathing properly. He was overall in really bad physical shape. He was also very skinny and dirty.

In my mind, he was not going to survive long on the streets.

I regularly feed the stray cats near home, but I have never been able to pet any of them — regardless of their age or size. Outdoor-born cats are typically feral. According to Alley Cat Allies:

Such a cat would prefer living outdoors, often as part of a colony, as they are unlikely to ever become a lap cat or learn to enjoy living indoors. I had already previously adopted a rescued feral cat from a foster home when I was living in the UK, so I recognized the tell signs of such behavior… but this little guy seemed different! He was a stray. He was out in the day, vocalizing, social, approachable… and alone. That last part was soon about to change.

I asked around the neighborhood, sparking a conversation with two elderly ladies, living in the building near where I found him. They told me he was thrown out of a car a few nights ago, as that is when they started hearing him meow loudly.

That same night, my partner and I took Goofy, as he was now known, to the vet. It turned out he had feline coronavirus (FCoV) — a common viral infection in cats, unrelated to the current pandemic, which is asymptomatic and causes diarrhea, and vomiting. If left untreated, it can result in mutations, leading to the development of feline infectious peritonitis (FIP) — a condition that is 100% lethal to cats.

The vet suspects he was previously cared for indoors, or at least in someone’s backyard, as he was socialized to some degree. She thought he was thrown out due to the rumors going around at the time that pets can infect their owners with coronavirus.

It was clear to me that he had become an inconvenience to his owners, who kicked him out in a neighborhood with a few cat colonies. This led to fights over territory. Ultimately, the vet and I both concluded that this cat was not made for the streets. After a few hours of examinations, blood tests, and other unpleasant experiences for the little dude, we headed home. We started an adventure, which continues until this very day. Here is what I learned thus far.

1. The transition process is (very) hard

What you might not realize, or should I say what I did not realize, is you can’t just bring your newly adopted stray cat home, especially if you have other pets. Cats that live outdoors typically have internal and external parasites, which can cause various diseases. According to veterinarians:

Your outdoor cat may bring fleas into your house. They may also bring in ticks, mites, ringworms, heartworms, roundworms, tapeworms, hookworms, and coccidian.

Besides, the cat could also have an infectious disease, which can hinder the health of the other pets in the household. In my case, Goofy ticked all of these boxes — thus, he had to be isolated from my other cat, Rascal, while he underwent treatment of his diseases and infections. He was isolated for three weeks in a flat my mom was trying to rent out at the time. My partner and I followed a rotation schedule and would spend two out of three nights apart— with him sleeping with Rascal in our home and me sleeping with Goofy. We were lucky this option even existed, as our home is a one-bedroom flat, which does not allow for such isolation.

Veterinarians agree that isolating a new cat is a must before they have all necessary vaccinations, are neutered, and are free from any parasites or illnesses. This can take even up to a few months, so make sure you are prepared, both in terms of organizing your lifestyle and mentally.

2. Expect hefty bills from the vet

This might not come as a surprise to anyone, but adopting a stray is not cheap. The first visit to the vet cost me about $150 (£115), which paid for vaccinations, tests, and blood work. Additionally, I spent around $30 (£23) that same day on the prescribed medicine. The second and third visits were made for repeated tests following the treatment, as well as neutering. Collectively, these two visits cost an additional $200 (£153). We are yet to perform microchipping, which is typically priced at around $50 (£38).

Medical costs are recognized as the most expensive aspect of pet ownership, but this aspect is even more pronounced when bringing a stray back to health. During the process of experiencing Goofy’s recovery, I gained a thorough appreciation for the challenges that pet adoption organizations and shelters go through in making strays ready for adoption. Specifically, I compared my experience with that of adopting Rascal, who came to me in a vaccinated, microchipped, neutered, and healthy (albeit scared) state. The process of achieving this in practice is lengthy, expensive, and emotionally draining.

Once we got accustomed to the ‘living in two places at once’ lifestyle, it became time to move our adventure at home. Introducing two adult male cats is difficult on its own, but having one recently neutered and the other being a previously-feral senior was even harder. Before starting the introductions, I watched every single video Jackson Galaxy ever made regarding cat behavior, introductions, and needs, as well as countless other videos (and articles) on the topic. I was confident that by following rigorously the experts’ tips, I would have a peaceful cat paradise at home in no time!

The door-feeding technique was the most common tip I found, so we started feeding our two cats at the opposite sides of the door. In her work for the book The Welfare of Cats, Crowell-Davis explains:

The formation of groups of related and familiar individuals around food sources is the first step in the development and organization of social behaviour in the domestic cat.

This technique is followed by slow steps in introducing the cats, such as replacing the door with a see-through surface, followed by a net of sorts, and then introducing combined playtime sessions gradually into their routines. During this process, however, we noticed a very slow pace of progress, as well as some hissing, and some unfortunate attacks on part of the newcomer. Our efforts, albeit sticking to textbook guidance, did not lead to any progress being made for several weeks. We felt like we were failing both cats…

Goofy started urinating in some places as means of marking territory, as well as exhibiting signs of jealousy and fear towards Rascal, resulting in aggression and attacks. During this time they were still separated, with only visual contact. Gradually, we began making progress by placing Goofy on a leash for collective play sessions two times a day, as well as promoting desired behavior through positive reinforcement.

4. You will learn to adapt — your habits, your environment, and your expectations

Routines became the most important thing in our household. To address the socialization challenges, we moved from free-feeding to regimented meals. Also, we shifted our morning and after-work routines to accommodate playtime. We introduced individual cat playtime before bed as well.

In terms of our environment, to quote Jackson Galaxy, we got “catified.” We installed enough shelves of different sizes and shapes to create “superhighways” across the walls in each room, bought additional cat trees, and added plenty of options for sleeping, grooming, and play. While this improved the confidence of the cats in all areas of the flat, it was yet to resolve the communication issues between the two.

We adjusted our expectations as well. This made by far the biggest change — recognizing that they are happy as things are just now. I always thought that a happy household with two cats means that the cats are “besties” and get along perfectly all the time. While I still believe this could happen someday, for now, I am grateful that I have two very happy cats, who are no longer living in life-threatening conditions. They are tolerant of one another when supervised, and affectionate towards us, which is all that I can ask for.

5. Most importantly, you will never regret this decision

At some point, I started feeling exhausted, as if I was failing both of them and even my partner, for taking this decision and putting them all through this… which is when the shift happened in my perception.

Their lives are safe, their health is good, and they are cared for and loved without limits, which is what this whole “adoption” thing is about.

Countless cats die on the street every day as a result of wounds, infections, diseases, or accidents, and approximately 2.7 million dogs and cats are killed every year because shelters lack space to care for them or there aren’t enough adoptive homes. I will never regret saving Rascal and Goofy from becoming one of those statistics, no matter how challenging the process has been and may continue to be.

I hope that I have provided clarity on the reality of adopting a stray cat. If you’re inspired to save a life: congratulations! If not: Adoption is not the only way to care for stray or feral animals. Here are some other ways you could help:

…and remember — every action, no matter how small, helps. Using your privilege and position in life to assist the lives of others is an amazing opportunity to grow as a person, as well as to shift your perception of life.